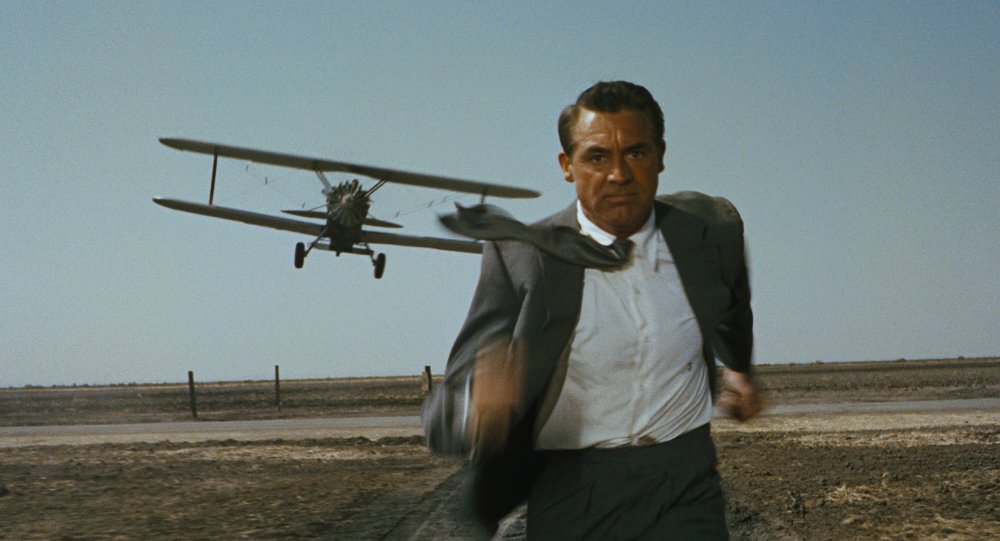 That’s funny, that plane’s dustin’ crops where there ain’t no crops.
14 November 2014

In 1959 Alfred Hitchcock decided to shoot an action-thriller, and in doing so produced an all-time great. 55 years later this is still the incredibly fun, rip roaring thrill ride he set out to make.

It’s not his greatest work but it’s up there, and what struck me this time around was the sheer impact this film has had on this genre of cinema. The Saul Bass title sequence sets the tone perfectly and was one of the earliest examples of kinetic typography. Even modern films fail to get this right (I’m looking at you, Walter Mitty).

James Bond owes a lot to the smooth talking slightly cocky well-dressed gentleman Roger Thornhill, played by Cary Grant. The suit he wears is almost an extra character in the film. The action scenes are great and shots like the well-known crop duster scene could have easily come straight from an early Bond film.

Same goes with the on-screen romance. Thornhill runs into a beautiful woman, played by Eve-Marie Saint, who clearly has several agendas but uses her charm and resourcefulness to hide the truth from people when it counts; reminiscent of a Bond girl. She plays the role well and shows an underlying vulnerability without coming off as weak or helpless.

North by Northwest also shows early signs of hardened cold-war thrillers to come. It’s not a gritty or complicated film by any means, but it’s an early example of a plot where the villain isn’t just some ‘dame killer’ or a femme fatale. This is a man trading government secrets, working on an international level. The stakes are potentially so much higher.

It could also be said that the ‘The Professor’, the spy boss running the show behind the scenes, is very similar to Alec Guinness’ George Smiley in Tinker, Tailer Solider, Spy, released on BBC TV 20 years later.

Despite the ‘new’ elements in North by Northwest, it still has all the elements of a Hitchcock thriller that we know and love. The every day man caught in an awful situation. The fantastic set pieces and attention to detail. The well thought-out soundtrack. It’s his trademark style applied to a film that operates on a much larger scale than usual, and it’s highly effective.

This film understandably never gets talked about as much as Hitchcock’s other works such as Rear Window (probably my favourite), Vertigo and Psycho. It’s just not as hard hitting, there’s not much symbolism aside from a cheeky sex pun at the end, and the plot is something we have seen many many times since.

However, North by Northwest maintains its place as one of my all time favourite films. It’s an unforgettable experience and one I’m always happy to keep coming back to. It is not typical film-school fodder but it’s iconic in its own way. This is a film that began to define what would become the new rules for making pure entertainment, and it’s a wonderful thing.