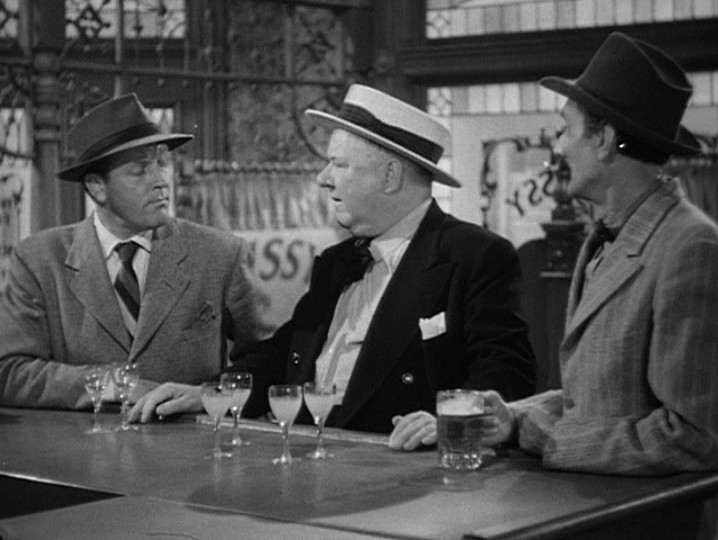 A drunkard (W.C. Fields) inadvertently foils a bank robbery, so the bank hires him as its security guard.

A Night at the Opera

A music manager does what it takes to get work for his client, an opera singer.

A murder suspect goes missing. As interest grows in the case an old detective gets sweet talked into getting back into business and solving it.

Sons of the Desert

Stan and Ollie try to go to a convention in Chicago, despite their wives telling them they can’t. They use a medical trip to Hawaii as an excuse to slip away.

Rufus T. Firefly (Groucho Marx) is appointed leader of Freedonia, a fictional nation on the brink of war with Sylvania. Instead of preventing the disaster he prefers winding people up with insults and wisecracks.

Short, sweet and much more up my street.

We’re back on track with our second trip through comedy history and now the films have a soundtrack with voices on!

A girl (Hailee Steinfeld) befriends an alien Volkswagen Beetle that turns into a robot in the blink of an eye. Together they must fight to save the world.

There hasn’t been a good Men in Black since the first one, so it’s hard to imagine a re-cast and reboot was ever going to do the trick. Spoiler alert: it didn’t.

A teenager and his brother set off on a quest to bring their father back for a day.

Well I am possibly the only person to have seen The Meg twice.

Having set himself up as a benevolent righter-of-wrongs on Craigslist, we join Denzel as he goes about his business.

Doesn’t hold up to a second viewing very well, but I like Denzel and I like it when he equalizes things.

The title of the film is also its synopsis.

Silent movies were done, Chaplin was not.

X-Men land, 1992. Jean Grey (Sophie Turner) gets hit with some mystical power while out on a mission. She is presumed dead at first, but when they rescue her she seems fine. Soon though her powers increase and she gets an urge to turn to the dark side.

Keaton signed with MGM after the collapse of his own studio, and this would be the first and last film where they would give him any creative control. By all accounts he was a troubled man and a difficult colleague to work with, but it is still a surprising decision considering it made money and was a critical hit.

Creating a bedroom camera obscura and making a paper negative

In this wonderful post, Colin turns his room into a camera. I have been interested in these since visiting the one up in Edinburgh. What a great way to spend the lockdown!

We watched these two back to back, so I’m talking about them all in one go. It was heavy going across the finish line for me with this franchise, I am definitely done with Harry Potter for another ten or so years.

Take 2: Harry Potter and the Half Blood Prince

Hour upon hour of stilted teenage romance. It mostly rings true in its awkwardness, but it goes on so long that they only leave themselves the last half an hour to actually tell the story and get things wrapped up.

Take 2: Harry Potter and the Order of the Phoenix

The longest book in the series, made into the shortest film. And yet it still feels like a lot of filler.

Take 2: Harry Potter and the Goblet of Fire

The tri-wizard tournament provides an unusual structure to the book, making it one of the ones I remember best. This does not really translate well to film, instead choking up the momentum of the narrative and making for another overly long and tedious event.

Take 2: Harry Potter and the Prisoner of Azkaban

Things are better now, in the hands of a director with a little more vision. This film is as long as the others, but every scene drives the narrative forwards, so it never gets tiresome.

Take 2: Harry Potter and the Chamber of Secrets

I was surprised to find that I watched this four years ago, I have no recollection of it at all! Back then I said it wasn’t that memorable, so I suppose I stand by what I said.

The estranged oddball son of a riverboat captain comes home to see his father and work on the boat.

Looks like we’re watching all 8 of these, that’s married life in a lockdown for you.

The Tramp (Charlie Chaplin) is hired by the circus and unwittingly becomes the star of the show.

We didn’t watch any Chaplin last year so in our time travel through comedy history: corona edition, we are putting that right. This time the little tramp goes to the Klondike in search of gold.

A young man (Harold Lloyd) goes to the city to make money and impress his girlfriend (Mildred Davis). He tells her he’s making big bucks but really is struggling to make a cent, and using what he does earn to buy gifts for her. When she comes to town to visit him as a surprise, he must make it look like he’s doing well.

In 1830, a man (Buster Keaton) travels to the south to claim a small inheritance. An old family feud still bubbles away though, and members of the rival family set out to kill him we he arrives in town.

Just astounding on every front. The impressionistic ballet centrepiece is a staggering work of art that chokes me up every time. Like a ballet partner the rest of the film lifts you up to it, and brings you down from it.