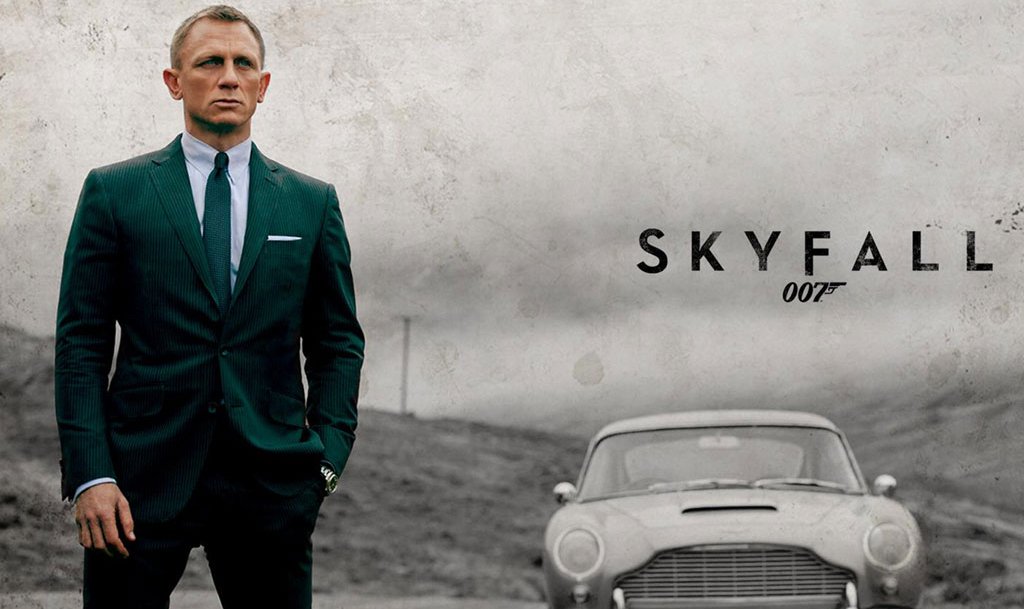 Financial troubles at MGM meant that there was a four year gap between Bond films. In that time they’ve shaken things up a little, brining Sam Mendes in as director, Thomas Newman as composer, and Roger Deakins as cinematographer. With those credentials, this is a film that shows promise from the get-go.

Bond gets shot in the field by a colleague who accidentally misses her mark; he gets out alive but is presumed dead and uses this to go into retirement. In the mean time a terrorist hacks into the MI6 building and manages to trigger a gas explosion, setting off a blast right in M’s office. Bond learns of this news and feels compelled to go back into the field in order to catch the villain.

Skyfall marks the 50th anniversary of the Bond franchise, and it’s a sentimental film in a lot of ways. We are constantly reminded that ‘sometimes the old ways are the best’. There’s an attempt to meld the ‘old’ and ‘new’ Bonds, the result is steeped in nostalgia. Admittedly some elements are quite heavy handed (at one point Bond uses the DB5 from Goldfinger…) but for the most part Mendes manages to lend an air of the old films to the Daniel Craig era - something which wasn’t even considered when Brosnan was in the role.

This reconciliation of the past with the present is a central theme in the plot. Javier Bardem plays the villain, Raoul Silva, an ex-MI6 agent scorned by what he saw as a betrayal by M, many years ago. It’s an old style revenge story brought together with a modern, technology based attack. Bond goes back to his childhood home, Skyfall, in order to lead Silva onto familiar ground; a literal trip back in time.

Actually the final third has to be mentioned since it’s easily the weakest part of the film. Some have joked that it’s James Bond meets Home Alone and although harsh it’s not far from the truth. Bond drives up to Skyfall with M and together with the gamekeeper they booby trap the house, awaiting Silva’s arrival. It’s a well executed scene but the whole premise and driving force behind it don’t really make any sense, and it’s a sloppy way to end an otherwise solid story.

There are issues all the way through with the plot, but it’s all details and nitpicking. It doesn’t make sense, for example, that they would connect the prison door system to their computer main frame. The whole thing rests on this in a way, but it’s forgiveable and easily written off as a necessary evil to keep the plot moving. However, when it all goes down at Skyfall, ALL of these issues are brought back to the forefront.

As to the performances, Casino Royale was a great turn for Daniel Craig but Skyfall is the film where he seems truly relaxed in the role. He effortlessly conveys quiet intelligence mixed with raw anger and of course brute strength. Surely he’s put any doubts about the casting choice to bed.

Mendes also exploits Judi Dench to her full potential. She’s one of the great actresses of our times but never seems to get to be involved as much as she should. Here she’s almost a co-lead and plays a pivotal role in Skyfall’s success.

In other supporting roles, Ralph Fiennes gets to play with a well constructed cliché-turned-on-its-head role, Ben Wishaw gives a fresh take on Q & Naomi Harris is a little awkward in her new Moneypenny role but she’s probably a good choice. The real wasted talent is Berenice Marlohe, the ‘Bond girl’ of the film. She’s so interesting and exotic and is absolutely captivating on camera. She’s disposed of in what feels like 5 minutes. Completely absent and sorely missed is Jeffrey Wright’s Felix Leiter, a classic character he played so well in the last two films.

The Craig films have all so far comprised of solid action sequences and Skyfall is no exception. There’s another technical aspect of note though, the cinematography. Roger Deakins is one of the best in the business and his work here got him an Oscar nomination. It’s a well deserved nod, too; the sequence in the tower block is thrilling and innovative. The scenes in the casino are pure eye candy and set the mood in a way nothing else could.

This is a huge step up from Quantum of Solace and Mendes’ confidence means we aren’t bombarded with constant action sequences. Skyfall is a film made with love and care, and really gets the franchise up and running again. It’s a shame that the final showdown leaves such a bitter taste in our mouths.